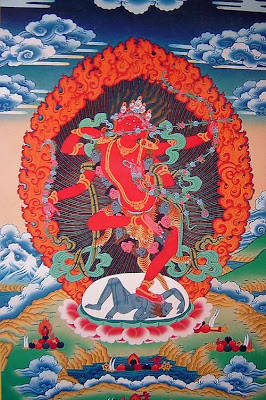 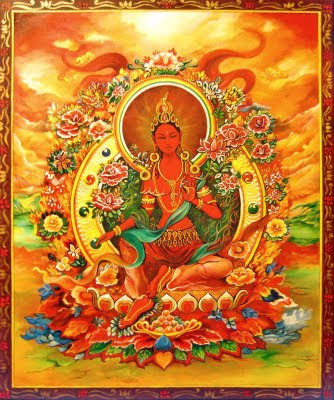 Kurukulle - Deity of Magnetism
(The Dakini of Magic and Enchantments)

Kurukulla is one of the Buddhist goddesses originating from the country of Oddiyana. Kurukulla is translated in Tibetan as Rigiyedma (rig-byed-ma) meaning “ She who is the cause of Knowledge”. She is associated with King Indrabhuti.

She is very popular among Tibetans for her magical function of enchantment (dbang gi ‘phrin-las) and bewitching of the people in order to bring them under one’s power (dbang du bsdud). She is pre-eminently the Buddhist goddess of witchcraft and enchantment but in real sense, she represents empowerment of the feminine in a patriarchal milieu.

As Green Tara be invoked for the protection from various dangers and threats, generally the eight great terrors and fears; Kurukulle may be called upon to exercise her powers of enchantment and bewitchment to bring under her power those evil spirits, demon and humans working against the welfare of humanity and spiritual evolution. In Tibet, she also is called upon when commencing the building of new monastery, undertaking new business or enterprise e.t.c. to subdue and subjugate all demonic and human forces that stands in ones’ path.

In Sadhanamala, there occurs list of eight great siddhis or magical powers acquired through her practice:

Khadga-siddhi; power to be invincible in battle with a sword.

Padalepa-siddhi; power to be swift of foot using magical ointment

Rasayana-siddhi; power to rejuvenation and long-life through obtaining the exilir of life by way of an alchemical process

Khechara-siddhi; power to levitate or to fly through sky

Bhucara-siddhi; power to move through earth, mountains and solid walls

Patala-siddhi; power to have command over the spirit of the underworld

According to the texts, Kurukulla is sixteen years old because sixteen is ideal number signifying perfection. She has beautiful face with voluptuous body and alluring. She is red in color for her magical function of enchantment and magnetism. She is single faced because she embodies non-dual wisdom beyond conventional distinctions of good and evil. She is naked is because she is unconditioned by discursive thoughts.

She has four arms because of four immeasurable states of mind, namely, love, compassion, joy and equanimity. She holds bow and arrow entwined with flowers because she can give rise to thoughts of desire in others minds. On her other hands, she holds hook that attracts and summons them into her presence and noose to bind them to he will. She wears human bone ornaments signifying the five perfections and she herself embodies the sixth perfection of wisdom. She wears a necklace of fifty freshly served human heads as she vanquishes fifty negative emotions. She is seen dancing as she is very energetic and active. Her compassionate activity manifests in both Samsara and Nirvana. She dances treading upon a male human corpse as she enchants and subjugates demon of ego. She stands on red sun disc because her nature is hot and enflamed with passion and she stands upon red lotus blossom because she is pure vision of enlightened awareness.
Posted by Yanti Wong at 4:32 AM