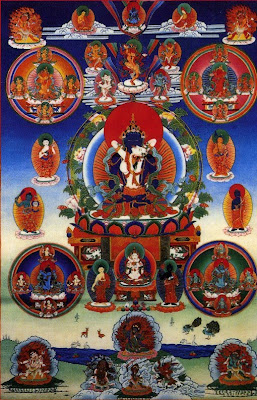 The Origin
It is stated in the Tantric legend that a king once executed his spiritual master. Due to this heavy sin, he passed away immediately and was born in the hell. He experienced the sufferings of all the six realms at the same time. Lord Buddha saw the great suffering of this being and He instructed him on the teaching and practice of the hundred deities. By just listening to this teaching and mantras of the hundred deities, this suffering being was liberated and reborn in heaven.

At one time, there was an evil minister called Shata in Tibet. He had killed many innocent people and also caused a lot of obstacles to prevent the consort of Padmasambhawa, Yeshe Tsogyal, from practicing the Dharma. After his death, he was born in hell. Guru Padmasambhawa, and his consort saw with their wisdom eyes that the former evil minister was experiencing unbearable suffering. His consort tried to save him by using various methods but she did not succeed. Guru Padmasambhawa then used the hundred deities Mandala with Jang Chog to help the evil minister and many beings in the hells. All of them were liberated. Later Guru Padmasambhawa transmitted the teaching of the hundred deities to his twenty-five renowned disciples.

The Puja and Its Benefits
During the performance of Jang Chog puja, the hundred deities are invoked and the various types of offerings are made to them. The merits accumulated from these offerings are dedicated to the deceased to help them in their purification and liberation. The prayer itself is also an offering of assistance to those in the intermediate or Bardo state to show them the path to liberation. 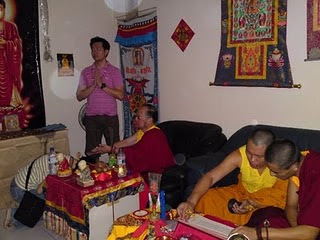 The god, demi-god and the human realms belong to the Three Upper Realms, whereas the hell, hungry ghost and the animal realms belong to the Three Lower Realms. We should strive for a rebirth in the Three Upper Realms and avoid the Three Lower Realms for the latter are full of sufferings. You would suffer tremendously if you fall into the hell or became an animal. If you were born as an animal, you would become very ignorant and would be slaughtered easily by others. If you were born as a hungry ghost, you would perpetually live in starvation, forever deprived of food, or any food that you could find would become inedible. So, we need to, at least, be born into the Three Upper Realms.

After hearing the teaching of The Hundred Peaceful & Wrathful Deities of Bardo, even one who has transgressed the Five Sins of No Respite will not fall into the Three Lower Realms, for it is “Liberation Upon Hearing” that will lead one to the attainment of Buddhahood. This is the most supreme teaching, as recorded in the Buddhist doctrines. Samantabhadra Buddha said, “Male or female yogis who pay homage to the hundred peaceful & wrathful deities will purify all their mistakes, including the broken samaya bond and bad karma, and they will be able to attain the common and uncommon (共与不共)accomplishments swiftly in their present lifetime.” The Hundred Peaceful & Wrathful Deities of Bardo is the most supreme treasure that can benefit all sentient beings widely, through which one could attain Buddhahood without doing the practice.

Guru Padmasambhava said, “This is a very special and supreme teaching, as one can attain liberation by simply hearing it – attaining enlightenment without practice, and attaining Buddhahood in a split second. It is the most profound method of attaining the perfect enlightenment, and also a method for freeing one of all negative karma created through wrongful actions. One who hears this teaching will not fall into the dark realms. It is a teaching only revealed to sentient beings who have accumulated great merits through their past practice. Upon hearing the teaching, one will receive great blessings and instantaneously attain Buddhahood.” It is a hidden teaching (terma) transmitted by Guru Padmasambhava, not revealed to those without merits. It is generally unheard of by most people. But once you hear it, you will have the seed of Buddhahood planted within your being. You ought to know that Guru Padmasambha is someone who spoke of the true speech – the vajra speech.

The genesis of The Hundred Peaceful & Wrathful Deities of Bardo began in this samsaric world dating back eons ago. There was a Brahmin who possessed supernatural power but was harmed by his student. The student was a prince who had also developed the Five Supernatural Powers. Out of jealousy, the student harmed his teacher and therefore fell into the Three Lower Realms and suffered great pains. Out of great compassion, Samantabhadra Buddha taught him the teaching of The Hundred Peaceful & Wrathful Deities of Bardo in order to help liberate him from the tremendous sufferings. Upon hearing the names and heart mantras of The Hundred Peaceful & Wrathful Deities of Bardo, the student immediately received the magnificent power of blessing from Vajrasattva and Vajrapani and was liberated from the great sufferings, and regained a human rebirth once more.

When you are free, you may visit our BuddhaEye website (www.buddhaeye.net) and take a look at the pictures of the hundred peaceful & wrathful deities. When you enter the bardo stage (after death), they will appear before you, one at a time. If you have not learnt this teaching and did not receive the empowerment, you will be frightened by their appearances, especially the wrathful forms, and run away from them instead. You might even blackout and become unconscious out of great fear. However, if you have received the empowerment and blessing, and you have seen their pictures in the past, you will recognize them and attain instantaneous liberation in the bardo stage. For you recognize them and follow them, you are following Samantabhadra Buddha, and you will attain Buddhahood. So, it is possible for one to attain Buddhahood in the bardo stage. The Hundred Peaceful & Wrathful Deities of Bardo is a teaching that only requires “recognition”, without practice.

Go visit the BuddhaEye website. Take a look at their pictures and store them well in your Alaya consciousness. One day, when you die, you will see them in your bardo stage, and remember, “Yes! I received the empowerment for this teaching in the past.” Follow the hundred peaceful & wrathful deities, and you will end up being born into the Pure Land of Samantabhadra Buddha. This is a very supreme teaching. I shall end here. Thank you.